Recently, a group of feminists and social justice warriors made a YouTube video called “Reasonable Questions for Anti SJWs“.  The first thing to note is that the SJWs in question simply could not restrain themselves  from virtue signaling in the title—they just had to add that “reasonable” to the standard “Questions for Xs” title.  It’s almost as if our default assumption is that SJWs would be unreasonable—which is of course a safe assumption and borne out very well in this video.

I want to discuss one “question” by Kristi Winters, which wasn’t a sincere question, but an attempt at politically correct shaming couched in the form of a question.  She asked, given the loathing of feminist misandry among anti-SJWs, whether the anti-SJW community would “call out” instances of what Kristi Winters asserted were cases of misandry in the anti-SJW community, specifically the use of such terms as “beta male,” “cuck,” and “mangina,” particularly towards male feminists.

There is a slight amount of cleverness here, in that Winters is trying to catch the anti-SJWs out in a moral contradiction, of practicing something they condemn when feminists do it.  Unfortunately, her attempt fails. And I am going to explain why.

Feminist misandry is grounded in a genuine hatred and/or fear of natural, healthy masculinity—invariably stigmatized by feminists as “toxic masculinity.”  Hatred of nature is one characteristic of feminism, which leads very easily into biology denialism and, as a consequence, science denialism.

The main trope here is “gender is a social construct,” which anyone who has bothered to investigate the science of the matter knows to be false.  Human beings are a sexually dimorphic species, conditioned by hundreds of thousands of years of natural history.  Men and women are, in short, different by nature, and everyone not deeply in the grip of an ideology knows this.

If gender were not grounded in nature, it would be shapable by society in radical ways—anyone could, more or less, “choose” to be transgendered.  But transgenderism and gender dysphoria are real conditions that people have. They are not choices.  Similarly, we have overwhelming evidence in the case of John Money’s disastrous attempts to have boys born with abnormal genitalia raised and “socialized” as girls.  For years, he assured parents that gender was a function only of socialization and that a child raised as a girl would, in effect, be a girl.  This led to monstrously cruel suffering on the part of the children he had forcibly misgendered, placing their parents in the the unwitting role of tormentors of their own children, whom they only wanted to help.  I refer you particularly to the sad case of David Reimer, thoroughly documented in As Nature Made Him: The Boy Who Was Raised As A Girl.

Now, it is true that gender expression is in part social and variable from culture to culture. But what is necessary to keep in mind is that CULTURE is always built on the foundation of NATURE.  In this way, gender is somewhat analogous to language. It is natural for human beings to speak language.  It is not, however, natural to speak any given language, e.g. English or Chinese; this must be learned.  It was once assumed that human language was infinitely variable across cultures, that is, socially constructed in a way totally unconstrained by nature.  We now know this to be false.  Languages do vary in superficial respects, but all human languages reflect a universal underlying human grammar—this is what makes translation possible, among other things.  So, while gender expression can and does vary somewhat due to social factors and conditions, it does so within natural parameters. There is, in other words, a kind of natural grammar and syntax of gender.

And again, we all know this. Men and women do not act just alike or interchangeably, but with their own characteristic masculine and feminine modalities.

What does all this have to do with the matter at hand?

This: Kristi Winters and feminists like her, female or male, are misandrists because they hate or fear and want to suppress, extirpate, and replace natural, healthy masculinity (and to a large degree natural healthy femininity as well).  This is what misandry is—a hatred of men grounded in the way men are by nature.

Now, it is also human to become either virtuous or vicious (as Aristotle says) and the two sexes have their own characteristic “styles” in this regard, men being manly, and women being womanly.  It is probably going too far to say that men and women have different virtues, but I would say they perform the virtues in different ways—the virtue of modesty is a case in point. No matter how much and how often feminists whinge about double standards, promiscuous females are always going to be looked down on in a way promiscuous males are not.  There are reasons for this.

What do terms like “beta male”, “cuck”, or “mangina” signify? Are they misandric? Do they reflect a hatred of men?

No. They reflect a degree of natural contempt for males who are, in one way or another, failed men. Such men are emasculated males, who fall short of the proper realization of their masculine nature, for whatever reason.

They are contemptible, and especially so to women, who are not attracted to such emasculated males. It is something of an open secret that feminists despise male feminists—at least as potential mates.  Here is a literal cuckold, virtue signaling about how good a feminist he is to let is wife sleep with other men: What Open Marriage Taught One Man About Feminism. This man’s article was greeted with near-universal contempt. And rightly so. I defy you to read this article and not hold this man in contempt. I have no doubt that his wife holds him in contempt. If you succeeded, congratulations—you have managed to eradicate your natural sense of contempt by means of ideological brainwashing.  Good on you.

So, no, Kristi, we don’t hate men. That’s your thing. We do, however, have a degree of contempt for failed men. I know you think that their failure is really a “victory” over “toxic patriarchal masculinity”—but you are wrong, and the dating and mating preferences of women prove it and will keep proving it again and again. Pathetic, contemptible beta males will never be valuable commodities in human sexual interactions, no more than ugly, fat feminists will be, no matter how much both groups whinge about how unfair nature is.  Beta positivity is as doomed as body positivity.

I don’t mind being the one to break it to you: Nature is anti-SJW.  Nature could not care less about gender fairness.

And human beings will always judge others by the standards of judgment which are natural to them, because these are the natural standards.

When you declare war on nature, Kristi, you can’t win. All you can do is make a lot of human beings unhappy if they listen to your bullshit.

I recommend listening to a couple of Romans on this point: 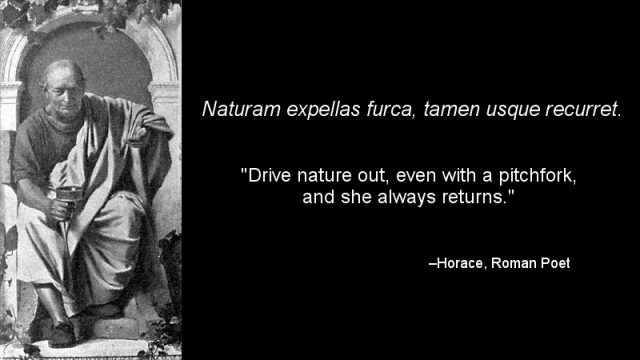