If you spend any amount of time online following or taking part in debates, you’ll eventually see someone accuse someone else of committing or employing “a fallacy.” What exactly does this mean?

What is a “fallacy”?

There is fairly wide agreement about what one is, some kind of error in reasoning, but if you take a close look at how logicians both professional and popular define “fallacy,” you will quickly see that there seems to be no “something more than just an error” that people seem to think there is. Here’s a representative list of definitions:

“A fallacy is a deceptive error of thinking.” – Gensler, Introduction to Logic

“A fallacy is a mistake in reasoning.” – Kreeft, Socratic Logic

“A fallacy is a flaw in reasoning.” – yourlogicalfallacyis.com

“A fallacy is an error in reasoning.” – The Nizkor Project

“A fallacy is the use of invalid or otherwise faulty reasoning or ‘wrong moves’ in the construction of an argument.” – Wikipedia

“A fallacy is a kind of error in reasoning.” – Internet Encyclopedia of Philosophy.

What makes an argument valid or invalid?

(V1) An argument is valid if and only if it instantiates any valid argument form.

(V2) An argument is invalid if and only if it fails to instantiate any valid argument form.

This principle is INCORRECT:

(F1) An argument is invalid if it instantiates an invalid argument form.

AN EXAMPLE: Consider the following argument:

Suppose Sophia and Jacob are having a Twitter exchange, and Sophia makes an argument, to which Jacob responds by typing (in all caps of course) “BANDWAGON FALLACY!” and ‘helpfully’ providing Sophia with a link to yourlogicalfallacyis.com’s description of the Bandwagon fallacy:

THE UPSHOT HERE is that Jacob has still failed TO DEMONSTRATE HIS CLAIM that Sophia has made an error in her argument. All Jacob as done so far is argue “I have said the name of an error; therefore your argument is in error.“

2. Suppose Jacob mans up and really does try to show that Sophia’s argument fits the alleged pattern of the “bandwagon fallacy.” And let’s suppose he succeeds. Well, he still hasn’t shown anything about the validity or invalidity of Sophia’s argument. We’ve allowed that he has shown that Sophia’s argument instantiates a type of reasoning that, as an informal fallacy, can be invalid, but it is the nature of informal fallacies (aka material fallacies) that they are sometimes errors and sometimes not. I’ve written a lot about this, mostly for Twitter. If you like, you can have a look at what I have to say about material fallacies HERE.  But just to give some examples:

(a) an appeal to authority is sometimes erroneous, sometimes not; appeal to experts in their fields or a scientific consensus are not errors of reasoning. In the 1990s, Andrew Wiles proved Fermat’s Last Theorem is indeed a theorem.  How do I know this? Because a few dozen of the the few thousand people capable of understanding Wiles’ proof checked it very carefully and agreed. So, my belief that Wiles’ proof of Fermat’s Last Theorem is sound is based entirely on the authority of some of the world’s foremost mathematicians. I could verify Wiles’ proof for myself, but it would require around a decade of mathematical study before I’d be in a position to—and frankly I don’t have the time or inclination. That is what expert mathematicians are for. If we were disallowed from appealing to authority, we’d have to establish all knowledge for ourselves at all times, which would completely defeat the point of the division of intellectual labor, and completely wreck science, since no established scientific “conclusions” could ever be appealed to.

(c) An appeal to universal human experience is not an “ad populum fallacy,” for example in the case of such claims as: “minds exist” or “human beings by nature are divided into two sexes” or “time has three dimensions, past, present, and future” or “anger and fear are emotions found in human beings” or Euclid’s Common Notions: “The whole is greater than the part” or “equals added to equals are equal” or “things which are equal to the same thing are equal to one another.”  The point here is that there really are COMMON NOTIONS, as Euclid uses that term, namely, things which all human beings know or can recognize that do not stand in need of any formal proof, because they are too simple or too obvious to have one (this is also called the consensus gentium, “the consensus of the whole species”—I’ve discussed how it differs from an ad populum error HERE.

3. But let’s make it a bit easier on Jacob, and suppose that he has detected in Sophia’s argument not an informal fallacy but a formal fallacy, such as affirming the consequent. Now, formal fallacies are different from material or informal fallacies in that they are invalid just in virtue of their form, and so do not depend on the situation, context, or content as to whether they are valid or invalid. They are simply invalid. Period.

Now, let us suppose that Jacob succeeds in showing that Sophia’s argument does indeed instantiate the invalid argument form called affirming the consequent (P⇒Q; Q; ∴P). Has Jacob now shown that Sophia’s argument is invalid? No, he has not. He has not, because to do so, he would have to be appealing to principle (F1): An argument is invalid if it instantiates an invalid argument form, which as we have seen, is a false principle.

Sophia is therefore entirely within her epistemic and logical rights to says to Jacob, after he has demonstrated that her argument instantiates the form of affirming the consequent, “So what? You still haven’t shown my argument is invalid. You wasted a lot of effort on showing something that has no logical bearing on whether my argument is valid or invalid.”

THE UPSHOT HERE is that Jacob has still failed TO DEMONSTRATE HIS CLAIM that Sophia has made an error in her argument, even if he has shown that her argument instantiates the form even of a formal fallacy. All Jacob has done so far is argue “Your argument instantiates a formally invalid argument form, an error; therefore it is in error.” And this argument is an enthymeme that requires the false principle (F1) as its hidden premise, and so is unsound.

THE UPSHOT HERE is that all appeals to fallacies as a way of refuting arguments or proving invalidity all seem to be instances of (B)—and they all fail because they can’t actually do the work of demonstrating invalidity.  THE MOST they can accomplish is to raise a doubt about the validity of an argument by suggesting that the argument in question has nothing more to it than the invalid form it instantiates.  That is to say, that the person making the argument is appealing to the invalid form as a valid form, which he or she means to establish validity, either in the mistaken belief that it is valid or disingenuously as a rhetorical move.  But if the person making the argument says “No, I see that pattern is invalid, but that’s not what I’m claiming makes my argument valid,” then an appeal to fallacy really can’t DO anything else. People WANT to say “No! Your argument instantiates an invalid argument form! It’s invalid!” But they can’t logically say that. That’s (F1) again, and (F1) is false—obviously false, even: “You can’t get from A to B” obviously does not follow from “You can’t get from A to B by route F.”

Fallacies aren’t very useful because they CAN’T DO MUCH.

Naming a fallacy certainly doesn’t show anything about an argument’s validity or invalidity.

Showing that an argument fits the form of a informal fallacy doesn’t show anything at all, since material fallacies aren’t always fallacious—that depends entirely on the content, and you’d still have to show that the argument in question is in error, something which, if you are able to do it, makes the citation of the “fallacy” completely redundant and superfluous, and if you can’t do it, makes the citation of the “fallacy” completely toothless and pointless.  So in the case of informal fallacies, citing the fallacy accomplishes nothing either way; everything turns on whether you can demonstrate an actual error in the argument. EITHER WAY, the citation of the fallacy adds nothing and does nothing.

Showing that an argument instantiates a formally fallacious argument form also doesn’t show anything about the validity of the argument. Because (F1) is false, from the fact that a given argument A instantiates a given formally invalid argument form F, NOTHING FOLLOWS ABOUT THE VALIDITY OR INVALIDITY OF A.  So, once again, if you are going to get anywhere, you’d have to show an error in the argument itself, and the appeal to the fallacy (1) does not show any error, nor (2) add anything to the demonstration of error if one is able to show an error in the specific argument. So in the case of formal fallacies, citing the fallacy accomplishes nothing either way; everything turns on whether you can demonstrate an actual error in the argument. EITHER WAY, the citation of the fallacy adds nothing and does nothing.

EITHER WAY, the citation of a fallacy ADDS NOTHING and DOES NOTHING.

It is with satisfaction and pleasure that I learn that Peter Geach, one of the greatest logicians of the 20th century, and a philosopher I respect extremely highly, makes the same point that I do: that ‘fallacies’ understood as invalid argument forms are not invalidity-makers of arguments: 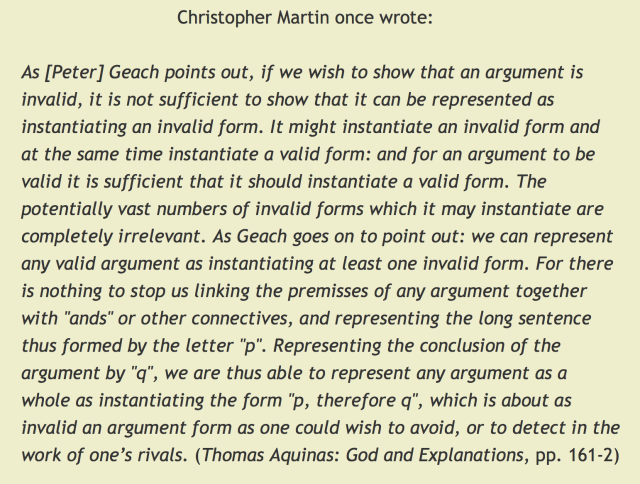 As Geach notes, if it were the case that invalid argument forms were invalidity-makers, then all arguments would be invalid, since all arguments can be reformulated an the conjunction of all their premises with &s, leaving us with the invalid form

which gives us a simple modus tollens

Philosophers are (or should be) interested in truth, not originality, so I am always pleased to find points that I make in philosophers I respect.

9 comments on ““Fallacies” aren’t what you think they are—and they aren’t very useful.”